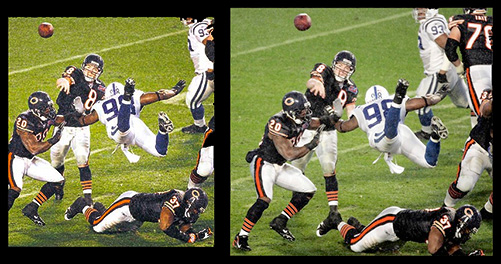 The other day, Mike Johnston at The Online Photographer named one of these photos the Photo of the Super Bowl. Which one? i don't know, and that's the point.

You see, these photos were taken by two different photographers from different organizations -- but at first glance they seem to be exactly the same photo. Now, this is a great capture of an important moment, and it shouldn't matter that someone else was able to capture it. But it does, at least on a broader scale, because it's totally unsurprising.

This sort of thing happens quite a bit at the biggest sporting events. I guarantee that both of these photographers were using exactly the same equipment at exactly the same settings -- a Canon 1D Mark II N with a 400mm f/2.8 or 500mm f/4 lens. They weren't doing this because of any prior collusion, but because the Sports Illustrated sort of sports photography follows such tight constraints on creativity that any other combination would have been "wrong."

It makes me appreciate people live David Burnett all the more, who showed up to photograph the Olympics with the most inappropriate equipment imaginable -- a $15 toy camera and a 4x5, which is both incredibly slow and where any motion appears upside down and backward on the viewing screen. I also appreciate sports photographers who constantly push the envelope, like Flickr's Thomas Metthe, who uses incredible creativity and effort even on high school athletes for a mid-sizes newspaper. But I would be wholly unsurprised if the sidelines photographers for Sports Illustrated and the rest are eventually replaced by robots.