Last night I asked Andrea to marry me and she said yes.

I know that getting engaged on Valentine's Day may seem excessivlely cliche, but Andrea's a smart cookie -- and I wanted to surprise her. I figured yesterday was one of the few days I could take her out to one of the city's fanciest restauarant for an eight-course meal and not have her expect anything. Kobe beef, by the way, really is as good as they say.

The big plan was to have an excellent VDay dinner and then head back to her home via Grand Central -- which just happens to be the place that we met. I'd been pretty calm all day -- except for the part where I called her father to ask for permission -- but I was nervous about the ice storm shutting down trains, and got more nervous in general as we stepped out of the subway and up the long escalator.

As will surprise very few of you, the ring was hidden in my camera bag -- less symbolism than simply the safest place for it. Since we got into Grand Central just minutes before our train was leaving, though, I realized it also worked into the perfect excuse:

"It's Valentine's Day and you look so nice ... let me take some pictures of you."

I moved her in position and she did some cute poses in the middle of Grand Central's hall. As I directed her, I started to talk about us, askng her if she'd realized that this was the place we met, telling her how happy she made me, how much I loved her, and such -- of course being already on my knees just to get some good photography angles, or so she thought. But then I put the camera away and kept extolling the virtues of our relationship ... and then I fumbled in my pocket, and I saw recognition of the moment flickr in her eyes.

I pulled out the ring. Her eyes widened. "Are you serious?" The NYPD offers behind us called out "Say yes!"

"Oh my god! Yes!" she said. I heard a call of "Awwwwwww..." from the crowd. And there was much rejoicing.

My knee is still dirty from the storm-muddied floor of Grand Central, and I couldn't be happier. 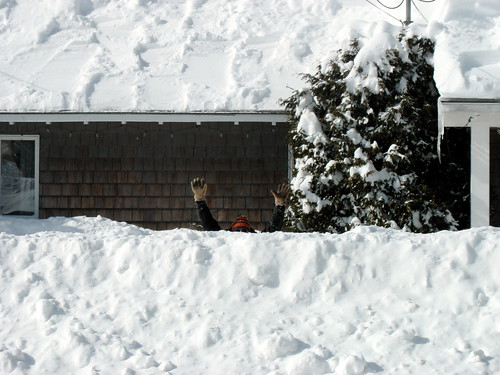 The morning after our Valentine's Day Snowstorm
Originally uploaded by Sara Johns.

I couldn't resist posting this one, taken by my mother. While I was out getting engaged, they were having a bit less fun, and a lot more snow.