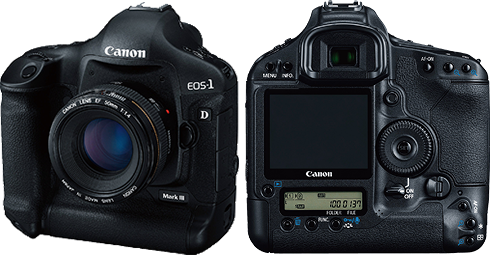 Yesterday, Canon released its latest professional "speed demon" camera, the 1D Mark III. Shooting at 10 frames per second, this camera is particularly marketed at sports shooters, but comes in handy for any professional (or rich amateur) who sometimes needs blistering speed, from photojournalists to some wedding photographers. To put it mildly, it looks really, really nice. And a lot Nikon users are kind of freaking out. Including me.

At first blush, this makes no sense: The 1D, after all, is hardly my ideal camera, and not just because I like the way Nikons feel and work. I prefer smaller but rugged cameras, whereas all Canon 1-line cameras are large enough to have significant gravitational pull. This camera has a 1.3x crop factor, which would be a great compromise if it were standardized and companies made lenses optimized around that frame size. But it's not, and they don't, and that leaves it feeling like a bit of a kludge. Its raison d'être is its 10fps, and I don't need that enough to pay the premium price for it. That said, if I were a Canon shooter I'd have my order in.

But there's a few things that are making Nikonians sweat. First of all, Nikonian sports shooters, whichever of them are left, should be in a state of mild panic. Canon was already lapping Nikon in sports, and now they're in a whole different race. In fact, I'm scratching my head a bit as to why they chose to update their sports camera, when their true flagship, high-resolution-but slower 1DS line is much longer in the tooth, and not trouncing Nikon in its market as severely.

But the paperwork on this thing promises even better low-light image quality than the 5D, the current champ. That's a huge thing for me. I have to compete with other photographers. If someone has this and can shoot at four times the shutter speeds I can because of noise performance, they have a pretty big advantage. Nikon has done amazing things with sensors at the low-end -- the D40 performance is class-leading -- but they end up having to polish the same mediocre Sony sensors throughout their line.

Which leads us to what's truly worrying people -- no real indications from Nikon that they care about their pro line. When Canon updated its ultrafast (and expensive) prime lenses with the 85mm f/1.2 II and the 50mm f/1.2, Nikon released their 386th kit lens (or something, who's counting?) When Canon released this beast with a newer, better wide-angle zoom (previously Nikon had the advantage there), what did Nikon release? A bunch of point-and-shoots.

Maybe Nikon has some great, truly state-of-the-art cameras right around the corner. But we don't know. Lots of companies give some sort of road map about their future products. I know a lot about what's going to be in Apple's next system, since you can find the info on their home page. When Pentax released the K10D, with weather sealing and capabilities for internally-focusing lenses, it seemed strange, since Pentax had no weather-sealed, internally focused lenses to work with it -- or it would have, if Pentax hadn't released a road map that said "these lenses are coming!" And here they are. Nikon needs to release some sort of professional road map. Is there a 35mm-framed camera nearing release? Let us know. If there are no plans, let us know that you're committed to the 1.5x crop, so we can choose whether to stay or go based on good information instead of anxiety about the future. Commitment would mean efforts to improve your own sensor designs and more professional DX lenses, especially wide-angle primes. Frankly, I'm fine for this year, and most non-sports shooters should be, too. But things are changing rapidly. The improvements in sensors mean taking photos literally in the dark is within reach now, opening new possibilities. It would be nice to know who's headed in the right direction.

UPDATE: There could be another reason this camera is tempting me. As Thom Hogan notes, a lot of the subtle changes were cribbed from Nikon, which would seem to make general usage a lot more palatable. He doesn't even mention Auto-ISO, which the 1D3 sorta has.