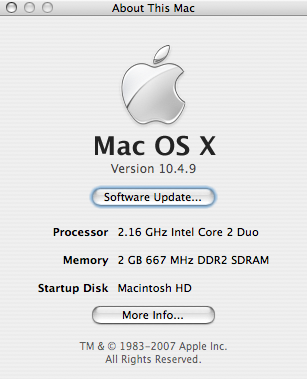 Mac OS X update 10.4.9 has been released. It's an interesting moment for Apple, since up until now the x.9 release has meant the next major system upgrade was right around the corner, but most credible reports say 10.5, otherwise known as "Leopard," isn't ready for prime time. So will Apple hold the line at 10.9, despite any pressing upgrades, or will it throw a bit of schooling at the public about the difference between versioning and decimal numbers. "No, 10.4.10 isn't the same as 10.4.1."

Star of the Show
Originally uploaded by carpe icthus.

During the speeches, someone steals the spotlight.