And a Good Time Was Had By All…
Originally uploaded by carpe icthus.

Andrea and I hosted our first party as an engaged couple last night. For my part, I made corned beef and invited someone named McGinley, so I was covered.

Of course, I'm the kind of person who takes time while getting ready for a party to do product shots with wireless flash.

This weekend, there was an anti-war protest marking the four-year anniversary of the Iraq War. For a number of reasons -- a rally point, good organizing, and the fact that you have to feel a bit powerless before you'll take to the streets -- the anti-war contingent was met by a group of Iraq War supporters that very likely outnumbered them. Michelle Malkin, one of the organizers of the pro-war faction, was outraged the next day when the Washington Post ran this photo: (click on photos for larger sizes) 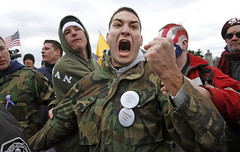 Specifically, she had two complaints. First, that the Post wouldn't run photos of liberal protestors in the same enraged state, and that the paper should have run a photo like this: 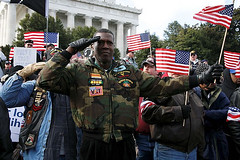 To say I am not a fan of Malkin's is rather severe understatement, but this is not the blog for political haranguing. I think she mistakenly brings up some interesting issues about the philosophy and ethics of photojournalism.

First, let's get a couple things straight. The first photo is a great shot; the second one is … not. Sure, art is subjective, but not *that* subjective. The first one has action, perspective, leading lines, clear faces, and will reproduce great in newsprint. The second is a posed, unexciting, poorly angled photo that would look like a dark blob when reproduced in a paper. But they both tell very different stories, and each are important.

Anger is photogenic. The open mouth, the pumping fist, the feeling (very likely false) that the photographer may have been in some danger -- that's great stuff. But let's face it -- the guy looks like a psychopath. Heck, he really could be a psychopath, or at least he was acting like one … and that's why the photographer went straight to him. He has another fantastic shot in the gallery of the face-painted guy on the right. Clearly, that's where the action was, I would have sought out the same people. In doing that, though, you miss all the relatively normal folk away from the front lines.

But is this just a case of the "liberal media" out to make conservatives look bad? Well, let's go beyond the assertions and look at what photos the WaPo actually posted of anti-war protesters that day: 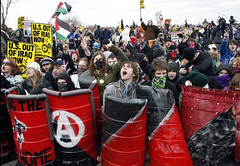 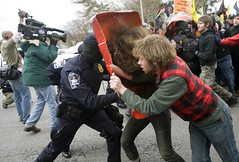 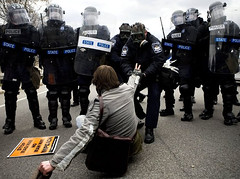 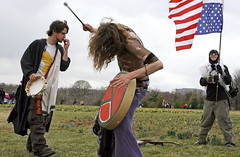 These photos do not make the anti-war protesters look like "the good guys." I admit, when I saw the photo of the front lines with their make-your-own riot gear, I was outraged, and so would most other people who saw that. Now, the anarchists who sign up for protests just because it's a good excuse to bust some heads aren't the bulk of the anti-war movement. But they sure do make the most interesting pictures.

So, in fact, Malkin is making the same complaints liberals have for years. By just focusing on where the good hard-news photos are, the movements seem even more radical and trivial than they are. Photographers and photo editors have a natural bias to make the best photos they can -- it's more than bias, it's their reason for being. But it does color the way they see the world. Rather famously, it can make war look glamorous and possessed by a strange beauty -- look at the work of James Nachtway or Steve McCurry's shots of the oil wells burning in Iraq for quick examples -- when the reality is just deadening horror. In any case, it's an interpretation of reality, reality-as-art, not a faithful documentation of the scene.

Of course, where it gets tricky is that there is no such thing as a faithful documentation of a scene. Any photographer, literally and metaphorically, has a point-of-view. But the bias of the photogenic has constant, predictable effects on reporting. Trends don't stick with us, moments do.

So what can photographers do about it? Not much, in the short term. They're going to run the best photos, and we wouldn't want any less. But things can be done. The first, of course, is not to be propagandistic. If the photographer had showed up thinking "I'm going to get some shots of right-wingers acting crazy in the can, and then I'll file," he's not doing his job as a journalist. You should always have the capacity to be surprised, and to react to that. Secondly, though, we need more of a market for long-term, contextual stories and photo essays. If one photographer was at the protest, two more should follow the factions home, find out more about them, learn why someone drove 13 hours just to make themselves heard. Magazine writers do that all the time, but photographers often have to do that sort of thing on their own dollar, hoping that, years later, it will be interesting enough for some magazine to pick it up. That's because there were very few print outlets that could regularly devote enough room to giving great photo essays proper play.

Enter the Web. It's no harder to put up a great photo essay than a long text-story, other than comparatively minimal bandwith costs. The newspapers are already doing this by giving extra photos with big stories, but it's time to capitalize on that. Don't just hire photographers to shoot illustrations for magazine stories, for obvious long-term projects like embedding with troops in Iraq, and to show their b-roll online from a particular shoot. Send them out to places that are good stories but without the same, obvious photos. With time, a good photojournalist can take the important and make it photogenic, instead of taking the photogenic and making it important.

(Credits for all photos in first two links.)
Collapse