Sometimes the clearest way to see the value of professional photography is to look at what happens when people make an end-run around it. Case in point: New York City subway ads.

The ads that plaster the shiny silver walls of the subway cards show extreme variation in photographic quality. You have the national firms like Budweiser throwing money at extremely detailed Photoshopped compositions of gorgeous, airbrushed models dancing around an impossibly sweaty beer bottle. You have the "learn to read English!" ads using the same stock photos they had when I arrived in NYC in '96. And then there are ads like the one for Interboro Community College. The ad itself is a fairly nice design, and it features students who used the college to get ahead. But the photos, obviously taken by a random office guy with a point-and-shoot, look something like this:

The problem is that it undercuts the whole ad. Frankly, if NYU ran photos like that with their ads, people might think they're being edgy. Here, it says "this is a college so third-rate that it couldn't afford $500 for nice headshots." And of course they could afford it -- they afforded the ad placement, after all. Given that these colleges are trying to convince the commuting world that they should be taken seriously, the photos ensure a big part of their ad budget goes to waste. It's a textbook case of how some companies can be penny-wise, pound-foolish. 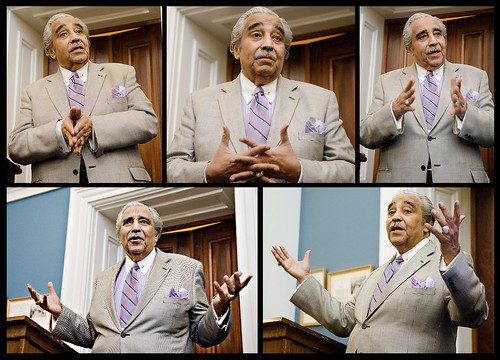 There are a lot of survival skills you'd pick up after 36 years in Congess, and one that Charles Rangel has clearly mastered is the really good gesture. Whether or not our gestures say a lot about us, we unconsciously think they do. From the shoe-pounding Kruschev to the random punctuation of Bush the First, as parodied by Dana Carvey, it's easy for a politician to be defined by his hands alone. Here are a few photos I captured at a Capitol event this week to show a master at work.