Long-time readers will remember that I used to go nuts every time Apple released a new product. Well, Apple has released the ludicrously fast EIGHT-core Mac Pro. And I look at it and think, "How would owning that affect my life?"

Not very much. While my G4 Powerbook is in dire need of replacement (and will be replaced soon), my 24-inch iMac is fast enough for anything I can throw at it. What takes time is when the computer is waiting on me, not vice-versa. It's good enough, even for someone doing fairly intense work.

Camera companies are getting windfalls right now because, with the advent of digital, cameras aren't good enough anymore. It's ironic: The Nikon F100 was good enough, but the cameras that replaced it, being on the bleeding edge of technology, aren't. In the past year or two, we've seen digital cameras that by most definition really are good enough for pretty much any work, but not from the perspective of technology -- e.g. new cameras are still being released all the time with updates that give genuine new opportunities. Think that 1D Mark II was good enough? Meet the 1D Mark III.

So when will we get cameras that are so good that they actually hurt the makers? Cameras that few even want to replace after a couple years? Like everything that has happened with digital photography, I think that benchmark will come sooner than most think, and I'm sure the camera-makers are sweating about it. But it's great news for us. 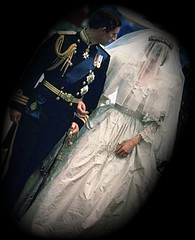 As a Web-savvy wedding photographer, I look at a lot of wedding-related pictures. A lot. Wedding photography has come a long way since the days of soft-focus lenses and an album filled with 50 near-identical grip-and-grins, but not all trends are so welcome. For some reason, as part of the transition from formal-style to candid-style, a lot of wedding photographers literally went off-kilter, tilting wildly to fit important elements in the frame, and it somehow went from a sign of desperation to an aesthetic.

Specifically, I mean the photos that include a strong sense of horizon, whether through the actual horizon or of people standing up -- macros rarely give a sense of tilting, for instance, since there's little sense of which way is up in the first place. But I've seen albums where the average photo was off by 30 degrees or more. Individually, some of the photos can be excellent, but taken together, it will have you reaching for the Dramamine.

Which brings me to my point: Tilting is a gimmick. Now, I have no problems with gimmicks, particularly in wedding photography, where you have to get as varied an array of photos as possible in a short period of time. I like fisheye, I like Lensbabies, I like motion blur. But gimmicks are like Joe Pesci -- best in small quantities. We love Joe in Goodfellas, but we don't want him to be the romantic lead. Beware of gimmicks, and beware of trends -- in the future it will be too easy for someone to look at a wedding album, see a formal tilted 45 degrees, and say "Ooooh, you got married in the 2000s!" Tilting is our decade's AquaNet.

I'm not a purist. I had a photography professor who considered vertical photos to be gimmicky -- *that's* a purist. But I realize that a tilted photo looks better at the time of capture -- when the photographer has a solid sense of the actual horizon -- than as a print, where it often looks a bit weird. The ironic part is that tilting started as part of wedding "photojournalism," but photojournalists don't tilt -- they follow the action, of course, but I've seen what happens in a newsroom when a photographer turns in deliberately tilted shots: if they're lucky, they get an askance eyebrow and a gruff "Next time, shoot sober." I had a predecessor get fired, in part, for tilting: another thing that show how wedding clients can differ in their choices from art directors and photo editors, who deal with photographers for a living.
Collapse