Last week, I replaced one of my D200s with the new Fuji S5 Pro. In the meantime, I've been putting it through a stress test of portraiture with wireless flash, high ISO shooting, action, events, ambient portraits, still life, landscapes … in other words, I just did my normal week's routine. So I feel a bit comfortable talking about it.

For those who don't know, the S5 Pro is the latest in a string of cameras that use Fuji innards in a modified Nikon body. This time around, they used the Nikon body, and there are virtually no external modifications. The red swoosh was painted in and the buttons were retasked. Otherwise, it's the same freaking camera: 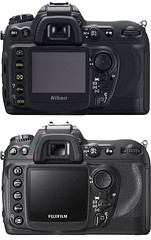 Frankly, that's great news … the D200 currently has the best body of any "small" dSLR — that is, one without integrated vertical grip -- bar none. So the externals shouldn't even need reviewing -- almost everyone in the market for this camera is familiar with the D200, if not current D200 owners. It can also do all the basic things the D200 can do -- it can take the same lenses, it can use the fantastic Nikon wireless flash system, it can even take the same battery grip (but not, alas, the same batteries)

So why does this camera exist? What's different? A few reasons:

1. Very few companies know color like Fuji. This camera, like the S3 and the S2 before it, tends to emphasize "pleasing" colors instead of "accurate" colors. No one used Fuji Velvia film because it was accurate (it wasn't) -- they used it because it was gorgeous. The Fuji line is optimized for getting great results right out of the camera, minimizing post-production time. With a few exceptions, this was true even of the aging S2. 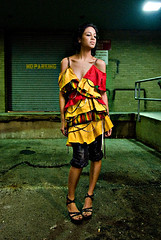 2. The Fuji S5, like the Fuji S3 before it, has a magic trick. It has two different sets of sensors capturing the same image. Big ones that capture the basic scene, and little, point-and-shoot-sized ones that capture the highlight detail. This gives it much better dynamic range than any other camera line on the market, which is particularly valuable for people who have to get a wide range of tones in one shot — like, say, an industry that specializes in shooting a woman in a white dress standing next to a man in a black tuxedo. Dynamic range can be valuable for landscapes as well, but landscape shooters tend to have the luxury of taking their time, and using filters or multiple exposures to capture a full dynamic range. That doesn't work so well with weddings.

Now I'd asked myself, "Is this dynamic range thing just something that photographers talk about? Do clients actually notice it?" But the first thing my fiancée worried about when she was picking a wedding dress was that we'd be getting married outdoors, and in most of the outdoor wedding photos she saw, the camera couldn't capture the dress detail. Sold.

How good is the dynamic range? One of the biggest dynamic range challenges I have in my day job is that I often shoot people in front of slide projections. The foreground is dark, and the background is bright, which makes for a bunch of exposures like this: 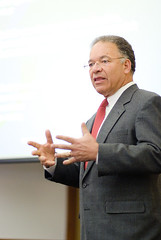 Now, on a normal digital camera, that display is gone. You can pull back a little detail from the upper left, maybe, but it's going to be a big, posterized mess. Luckily, I shot this with the S5, and I can bring the slide back: 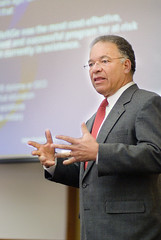 Now, you can do it more carefully without the halo, but this is just a quickly-done proof of concept. Not only were the tones retained, so was the original color. You have all the detail you need to work with. The dynamic range trick really works. You have to try to blow something out, and even then you'll probably fail. Keep in mind that it's the little, point-and-shoot sized pixels, though, so if you overexpose too much, you can save the image but you'll have the slightly weird scenario of noisy highlights.

The DR even works in JPEGs. Not as well as when shooting RAW, but you get almost as much DR as from Nikon NEF files, which is impressive.

This is another feature handy for wedding shooters. Nikon's noise isn't really that bad -- it's much better than color film, Nikon squeezes the best quality they can from the Sony sensors, and as long as you expose properly, even ISO 1600 can print at decent size. I had an ISO 1600 shot run about about 18x24 in a gallery, and it looked great. But if you don't nail that exposure, it falls apart very quickly, and it's definitely not the best on the block. The D200 has a lot of black channel noise that is hard to get rid of even in post, since it can muddy color and reduce contrast. The S5 tends to use a more aggressive noise-reduction engine, so don't expect killer detail at high ISOs (like the Canon 5D is capable of), but it prints well at most sizes right out of the gate and requires a lot less post-production work to clean up. Overall, I'd give it almost a stop of advantage. I can shoot at 3200 in an emergency on the S5, which I would never do with the D200 unless I was treating the noise as a special effect.

The photo below was an important lecture that they decided to hold with the lights off. I had to shoot at ISO 2500-3200 just to get a shot. Is there noise? Yes. Is it usable in a decent size? Yes. This is straight out of the camera: 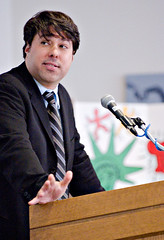 Those are the biggest things, its reason to be. What else is good about the camera?

But … it doesn't have all the D200 features. We'll cover that in Part II: The Bad.
Collapse