I've had people tell me that they were eagerly awaiting this part so they could save some money. In the end, that's up to you, but I'll do my best. This section will be nearly entirely predicated on comparisons to the Nikon D200, because that's where I see the up-in-the-air market. If you're a Fuji shooter and can't stand the idea of using any other brand of camera, save up for this one. Yes, it has basically the same sensor as the S3 … but all 35mm film cameras use the same "sensors," and yet some cameras were a lot more expensive than others for a reason. The rugged body and i-TTL flash usage alone would be enough for most, not counting esoteric benefits such as metering with manual-focus lenses. If you're a Canon shooter, it's probably not worth the lens exchange unless dynamic range is all that matters to you.

So … keep in mind that the S5 is a great camera all-around, but when you compare it to the Nikon D200, it comes up short in some big ways. 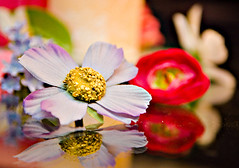 2. Speed. The D200 is a fast camera. It's not a world-class sports camera, but its 5 fps and good buffer means that every time you press the shutter, you know a picture's going to be taken. In contrast, the burst mode of the S3 is about half as fast on best settings, and even slower when shooting RAW with extended dynamic range. The shutter will only lock up during the fastest situations, but if you're used to looking at the LCD right after taking a shot, you're going to get really frustrated -- it can take a few seconds for a RAW image to come up even after one shot.

3. File sizes One of the reasons those RAW files take so long? They run close to 25 megabytes if you're shooting with extended dynamic range. That means you have to buy more cards and more hard drives, and those cards should be fairly fast, too, or you're going to have to wait a long time as they load onto your computer. An 8GB Extreme IV is looking really good to me right now.

4. The menus The D200 has one of the best menu systems of any camera. They are easy to read, organized well, and have a brilliant extended "recent settings" menu that can actually change the way you shoot -- it means that any setting you change in the field is only one menu level down, and can often be changed in five seconds or less. Here's a photo of my current D200 menu: 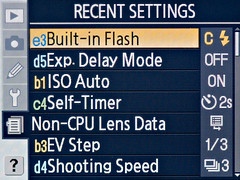 In contrast, the S5 Pro menus are awful. There are TWO different buttons on the camera to get at menu settings, which is wasteful to the extreme, and the individual items are scattered in a disordered mess between them. The only way to be able to change these settings on the fly at all is to memorize each and every last menu, and even then you'll have to dig through four or five levels to get to your most useful settings.

Of course, the S2 "menus" were just a series of numbers that made you refer to the manual to change, so I guess this is Fuji's idea of an improvement.

5. Image review: It doesn't get close enough to check sharpness. Highly frustrating, and hopefully will be fixed in a firmware update. On the plus side, the face-detection button works decently, as long as people are more or less dead-on to the camera.

5. Wonky exposure. I don't want to lay this all at Fuji's feet yet, because there are also issues with Lightroom and other converters that are trying to calibrate the right settings for a recently-released camera, but I've gotten some rather extreme underexposure out of the box. I calibrated mine to expose at a half-stop over the metered reading for every shot, which seemed to do the trick for the actual exposure, measured in JPEG. Lightroom -- one of the few RAW converters than can handle S5 files so far -- can't read the files right sometimes, and underexposes them a few stops. This isn't *actual* underexposure, though, just a mis-read as bringing them back up a few stops doesn't cause undue noise.

6. Resolution It claims to be a 12 MP camera. Not true -- the D200 has higher resolution. Even the lowly D40x has higher resolution. This matters very little to me. 6MP cameras always had enough for me, except possibly when shooting for a magazine double-truck -- and that's just to keep the art directors happy.

Overall, the S5 is kind of a weird camera. It's extraordinary in some important ways, and frustrating in others. I'm keeping mine; I always like the oddballs.

I've talked before about some of the differences between wedding photography clients and editorial clients, who tend to deal with photographers regularly. There are few places that difference is shown as starkly as in the way photographers market themselves to clients with Web sites.

I've been looking at a Web site revamp will let me take the HTML out of my hands, but it's very hard to find sites that work for wedding photographers that wouldn't completely embarrass me to hand to an art director. Why do these sites assume that the basic nature of people getting married are different from the rest of humanity -- since, in the long view, they pretty much are humanity? No users like Web sites with background music -- why do all these sites blast away when you open them? When Flash is used, it should be minimal and quick loading … designers know that. So why do half these sites redraw themselves every time you click a button?

Because they believe that prospective wedding clients … all of us … will be distracted by shiny things. Meanwhile, the art director faced with a "loading content" screen has already closed your Web site and gone on to the next guy's.

Here's the professional agency page for some of the most famous photographers in the world. Functional to the extreme. The photos speak for themselves. Compare to, say, this template, which seems to do everything in its power to distract you from them. And that's from one of the better companies!

I know this wedding stuff can make us crazy, but does it make us want random music to blare from our computers without our control? Am I destined to start liking MySpace?
Collapse