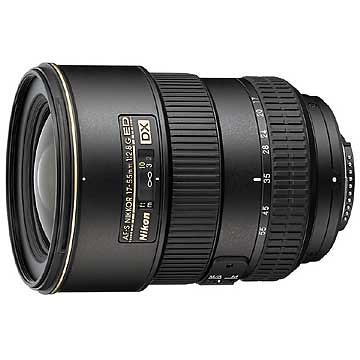 Introduction
The 17-55mm f/2.8 DX is a statement as much as a lens. When they started to design digital cameras from the ground up, manufacturers quickly discovered a principle that has defined the industry ever since -- sensors are expensive, and by making them a little bit smaller, they become a lot cheaper. This brought prices out of the stratosphere, but also frustrated a lot of photographers. A smaller sensor meant each picture was effectively cropped -- by 1.5x for Nikons -- so their prized lenses started acting differently. Wide angles became pedestrian. Standard zooms became a weird "normal to headshot" range. So companies started making digital-only lenses to fit the smaller sensor, but in almost all cases the lenses were built more cheaply than the lenses they replaced. For example, the 17-35 f/2.8 was replaced by the 12-24mm f/4 -- smaller, slower, and with more plastic. Nikon replaced the fisheye with a nearly exact digital version, but fisheyes are hardly bread and butter lenses. The general impression was that the digital lenses weren't truly professional, and neither were cropped sensors. (An impression that Canon clings to even today.)

In 2004, the 17-55mm changed all that. Although a bit smaller and lighter than the lens it was meant to replace -- the beastly 28-70mm f/2.8 -- it was every bit as strong, as quick to focus, and as sensitive to light. Even better, after the crop, it was wider on the wide end and longer on the long end than the 28-70mm had been on 35mm film. The idea that a DX lens could be of true professional build was unique among first-party manufacturers until now, with Pentax set to release a well-built, weather sealed 16-50mm f/2.8 (and matching telephoto zoom) for their system.

So, if the 85mm f/1.4 is my favorite lens, why do I consider this one the most useful? Why is it the one I leave on my camera by default? 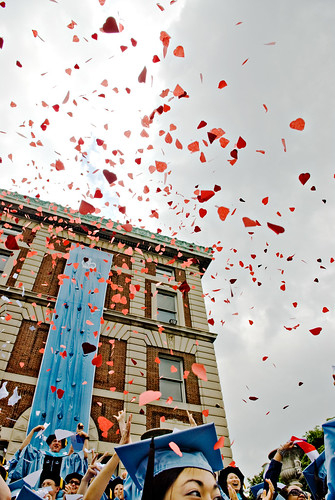 What is a fast standard zoom, and what is it good for? Again, some of the most important things about the lens are in its specifications. The 17-55mm goes from a decent wide-angle (not ultrawide, but enough to get that distorted wide look) to the short end of the portrait range. The aperture stays at a fast f/2.8 throughout the range, so among other benefits you can shoot wide-open and not have to worry about your exposure changing. Since 17mm is a short focal length, at the wide-end you have a very deep depth-of-field, even wide open. Combine that with the speed and it's clear that this is a great option for photojournalism, when you usually want to have the world in focus even in bad light. The fast aperture also can make your flash go farther with less power output, great for event coverage (I took more than 800 shots on a single set of AAs this week, since the flash never had to work very hard).

Another advantage of the short focal length is that, following the 1/focal length rule of thumb for shutter speeds, you can open up the shutter and shoot in low light or for motion effects. This was taken hand-held at 1/3 of a second:

1. Amazing wide-open performance. If you're going to spend your life shooting at f/8-f/11, get a cheaper lens. You can find used 18-70mm lenses for a song now, and they're fantastic in that range. You get this lens because you need the speed, so it HAS to perform well at f/2.8. And boy, does it. Extremely sharp, fantastic contrast, stunning clarity -- it's hard to come up with superlatives for how good its wide-open performance is. It's hard to see an improvement when you stop down -- not that there isn't any (it's ludicrous at f/5.6), but it's so good to begin with.

This picture was shot wide-open. I show a print of this to wedding clients, even though it's not a wedding portrait, because the print is so good. Razor-sharp where it needs to be, and with fantastic color reproduction and skin tones. The color reproduction on this lens is spectacular.

2. Build quality. Like I said before, this isn't a cheaped-down digital lens. It's meant to be tossed about a bit. With a metal build and a weather-sealed rubber ring around the lens mount, it's a good choice if you're rolling around the beach with an engaged couple or traveling through a war zone (sadly or thankfully, depending on your point of view, I have no war zone sample images). It's very well-balanced on the bigger cameras, from the D200 to the D2X. It felt OK on a d70s, but feels a bit silly on a D40-sized body.

3. AF-S focus. The silent-wave focus motor currently puts it ahead of the third-party lenses. Not only is it silent -- nice if you're shooting in a church or a music recital -- but it's blisteringly fast, and locks on focus very well. Keep in mind it's sometimes tricky to focus any wide-angle lens, since the autofocus engine is searching for detail that has been de-magnified, but it works like a champ throughout the range. This is especially important to me since, as a zoom going from wide to telephoto, I often zoom close to far-away quickly, which is where screw-focused lenses can drag.

What to worry about

1. Cost. C'mon, you didn't think you'd get all this for cheap, did you? It's an expensive lens, somewhere around $1200. For professional photographers who need the range and speed, that can make sense, but most others might be better served by the much cheaper (but optically great) Tamron 17-50.

2. Size: I use this on D200-sized bodies, and it feels perfectly balanced, but a lot of people might want to carry a lens that feels good on smaller bodies, or just don't want to cart around a hunk of metal all day. I know at least one well-respected event photographer who uses cheap lenses simply because he has to shoot one-handed all night, holding a flash in his other hand, and would rather not break his wrist.

3. Flare. This lens has a lot of elements. I don't find flare to be a particular problem, but it's not as well-protected against it as some other lenses, notably the 17-35mm Nikkor. You can shoot straight at a light source all day and it won't bother you, but if there's a strong light at the edge of your composition, you'll see it. Either compose around it, use the well-designed hood, or work it into your composition, like so: 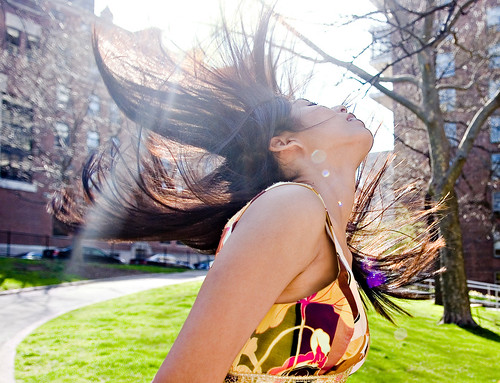 And … that's about it. I had to wrack my brain for a while to even come up with flare as an issue. If this lens fell off a cliff, I'd buy another one the same day -- that's if its tank-like body didn't survive the fall.

Recommended for: Rich people. Professional photojournalists and wedding photographers. People who bang their equipment around. People who leave their lens stuck on f/2.8

Not recommended for: Amateurs better served by third-party lens -- use the savings to travel somewhere you can take nice pictures. People who want light-weight equipment. People who leave their lenses stuck on f/11. 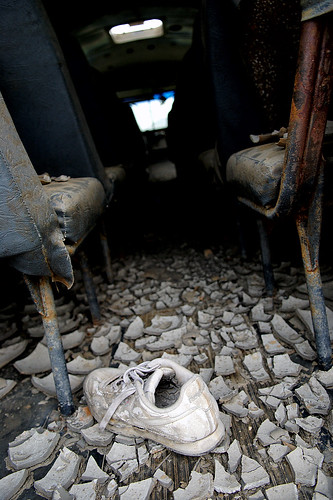 Click here for hundreds of samples I've taken with this lens.
Collapse