I don't have testimonials on my Web site now, and I'm considering whether or not to add them to my impending re-design. I get the feeling that it can sway a lot of people, but as a consumer I would be suspicious of them -- a photographer is obviously only going to use the happiest couple, and it would be so easy to pull a "Vandelay Industries" and write the testimonials himself, fielding calls to his sister.

But a true testimonial has value, because so much of a good wedding photographer is beyond the image. Were they communicative? Were they enthusiastic? Did they dress appropriately? Did they engage guests and manage time efficiently? In general, did they make the wedding a better experience while they were there, not just when viewing an album afterward? Unless you can actually sit in on someone else's wedding and watch them work (as some DJs allow), you need to rely on the flawed platform of testimonials to get a sense of that.

With that in mind, here's an e-mail I got back from a bride whose wedding I shot recently. It wasn't goaded, I didn't make it up, it just really touched me.

Your pictures were absolutely breathtaking. Excellent job; absolutely over the top, for me.

Thank you so much for the compliment regarding working with me and my family. It was my pleasure and pride to try to make it as easy as possible for you. And, likewise, you were just the man for occasion I was looking for. I am so happy I found you. You will be hired for future occasions.

I can see how much it is worth it to have photographs like these to document our lives (as we discussed). I am sooo happy I parted with the money and gained a nice professional relationship and product instead. 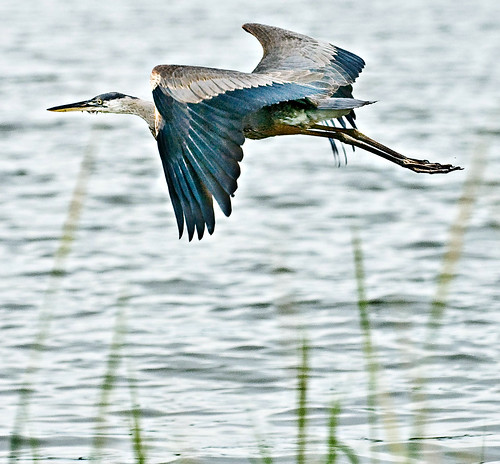 Out of the Stalks
Originally uploaded by carpe icthus.

I was trying to take an out-of-focus picture of blank, empty water and this stupid bird got in the way.

Well, either the rumors are true or there's a rogue employee at Popular Science, since they updated and then pulled a page that described a new, full-frame D3 and a D300 that uses the new 12MP Sony chip. If the rumors are true, then apparently the D3 will pull out all the stops for high-ISO quality, including not-gigantic files. Wildlife photographers will curse the skies if this is true, since the camera would have less resolution when your longest lens doesn't cut it than the current D2X. Wedding photographers, though, would be quite pleased. In other words, my fingers are crossed that we have a bunch of ticked-off bird shooters.

I'll update this post as I get more information. I may do things that entail having-a-life, though, so if you need down-to-the minute updates, wade through maddening threads at DPReview.

UPDATE: If the PopSci guy's information is right and the D3 has a 1.5x crop at 5.33 megapixels, that would make its full sensor virtually identical to 35mm film size, not a slight crop as many have said.

For the record, here are the rumored specs. At this point, this is just strict hearsay. But ISO 25,600 is so nice to say, if Nikon has, in fact, rewritten physics:


UPDATE Something about this doesn't ring true for me. A 14-24mm f/2.8 would be bulbous and monstrous if designed for full-frame. It seems like something a rumor faker would design based on the 1.1x crop idea, to satisfy the "what about my wide-angle?" sticklers. So either signals are crossed about whether there's a slight crop or not, or much of this is false, or all of it is false, or Nikon designed a lens that takes a swim cap to cover its front element, or physics has been rewritten again. So much certainty here, folks. I call new Coolpixes.

… or, maybe the 14-24 is DX, to complement the D300. Oh, that would make for some interesting spending decisions.

UPDATE: Are these the pictures? I don't know, I did that having-a-life thing for a while. That does look like a bulbous front-element that could belong to a 14-24:

UPDATE: It's real! http://www.dpreview.com/ has the goods. Off to read, then sleep.
Collapse