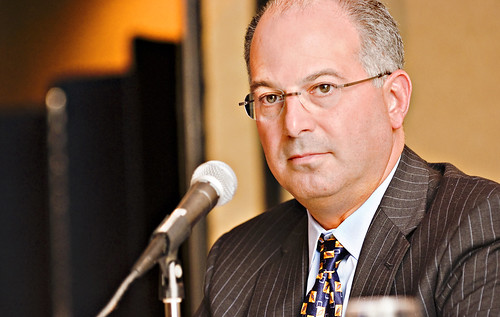 Photography isn't always standing on the edge of an active volcano, model at one side and a Hasselblad at the other (imagine trying to get insured if it was). Sometimes it's photographing jargon-filled conferences, spending a day taking pictures of people speaking into a microphone and occasionally drinking water. If you're of the right mindset, though, photography can always be interesting. It's virtually impossible not to take an interesting picture with the model and the volcano, but give me a man sitting at a desk under horrible lighting, and I have a real challenge on my hands. It's the challenges of photography that keep it fresh and lively, even when I have no idea what the participants are speaking about.

I'm including the picture above not because it's one of my better conference pictures -- in this type of shot, expression is everything, and his is pretty flat here. Rather, its elements illustrate a way that I chose to challenge myself on a recent assignment: How do I light a subject in interesting ways when all I have is a small strobe, and I can't take it off camera? I could do a passable job just firing forward, but how to go a step beyond?

Here's an aside: Strobist is wonderful, one of the most important things to happen to the photographic community in a long time. But a lot of times there are external constraints you need to consider. I had a conversation with the event director at my college about a photographer she'd hired for homecoming (I was busy): "Yeah, his pictures were good, but he had someone walking around with him with some sort of flash on a pole. It looked weird and bothered the guests." He wasn't hired back.

So … surrounded by an audience and with no place to set-up, on-camera it is. The existing light was horrible -- straight-down tungstens creating raccoon eyes, so just a high-ISO capable camera wouldn't do the trick. I had to overpower it, and I wanted to do it in an interesting way. I dialed up my ISO to 800, so the flash wouldn't have to fire as hard, and set my shutter speed to 1/250th, which kills the ambient light but not the flash, which fires faster than 1/250th anyway. Instead of firing the light straight at the subject or bouncing it forward, though, I bounced it upward and sideways, in as tight a beam as my flash allowed. This turned the light bounced off the ceiling to his front and right into a soft, directional light source, giving that off-camera definition of texture even though I'm standing right in front of the guy, flash on my camera. You'll also note that his eyes have nice catchlights, but his glasses have no reflections at all. If I'd fired straight forward or even bounced normally, those glasses would have had a big reflection.

For this particular image, I noted an interesting spill of light around the corner behind the table, so I opened up the shutter speed a little to 1/160th, letting the light pour out into out-of-focus geometry, but not fast enough to bring the nasty tungsten light back to his face. I fired a few times and got this -- and a whole lot of other, more expressive images.

A hundred problems to solve a day, and this is supposed to be boring? Sure, give me the models on the volcano, but give me the guys in business suits, too. Give me constraints on my shooting. Make me shoot a portrait in 90 seconds. Tell me I have to stand in the back of the church while the couple goes in for the kiss 200 feet away. It just makes my life more interesting.
Collapse